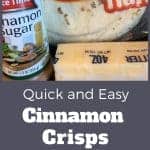 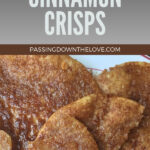 Tasty Cinnamon Crisps Recipe. Delicious, easy recipe for kids to make and can be served alone but are even tastier with vanilla ice cream!

As an Amazon Associate and a participant in other affiliate programs, Passing Down the Love earns a small commission from qualifying purchases at no additional cost to you. See the full disclosure here.

Do you remember cinnamon crisps?

When I was little, I loved watching my Mom make a pie.  Not because she was so entertaining or because I loved pie.  No, sir.

I loved what she did with the left-over pie crust.  She would roll it out, cut it into small pieces, and sprinkle the pieces with cinnamon sugar.

Then she baked them for us.

These little cinnamon piecrust morsels were far better than the pie itself.  At least in my mind.

Tasty cinnamon crips can be served alone or are even tastier with vanilla ice cream.

And this is an easy recipe for kids to make!

These cinnamon crisps are made with tortillas instead of pie crust.

But, if you’re making a pie, you can use pie crust just like we did “back in the day”.

When making these with kids, it might be easier to cut the tortillas into smaller pieces first.

Melt butter on a plate.

Dip the tortilla or tortilla pieces in the butter.

Or you can use a pastry brush and brush the butter onto the tortilla.

Here is the complete recipe, just for you.

The tortillas need to be coated on each side with butter.

Using a brush, brush the tops of tortillas with butter.

Turn and brush the other sides. Sprinkle Cinnamon Sugar mixture over the top.

Turn them over and sprinkle the Cinnamon Sugar mixture on the other side.

Watch them closely and remove them if done sooner.

These can go from zero to done in a quick minute!

Allow the crisps to cool completely, then break into cracker sized pieces.

As an Amazon Associate and member of other affiliate programs, I earn from qualifying purchases.

Does the smell of cinnamon bring back memories for you?

Did you bake with your Grandmother or Mom when you were young?

You know that your sense smell, when paired with an activity, will stimulate and enhance your memory?

Here’s an article about that: How to Make Childhood Memories That Last a Lifetime.

Cook up some Cinnamon Crisps with the kids.

Make memories in the kitchen.

You’ll be glad you did.