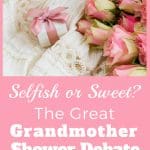 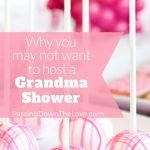 Are you familiar with the Grandma Shower trend?  It seems that Grandma’s friends have found yet another reason to hold a party.

Do Grandmas deserve their own celebration?

Who throws a baby shower?

Normally it’s thrown by friends (or aunts or cousins) and it’s thrown FOR the expectant mother.

Are you familiar with the Grandma Shower trend?

It seems that Grandma’s friends have found yet another reason to hold a party.

Hosting a shower for the grandma-to-be has become an acceptable practice.

What a great way to help celebrate the transition to grandparenthood.

But this Grandmother Shower trend is certainly not without controversy.

Grandmother Showers are usually given for the first-time Grandma.

This should be more of a celebration of a new role and status than just a gift grab, don’t you think?

Opinions about the Grandma Shower trend.

On one side, it would be very possible the expectant mother could feel left out, insulted, and angry about her mother or mother-in-law getting this kind of attention.

After all, it’s the mother that carries the pregnancy, births the child, and faces the day-to-day challenge of parenting.

On the other side, Grandmas are usually very excited and happy at the prospect of having their first Grandchild.

They would like to celebrate this wonderful stage of life and share the joy with their friends.

In her article on the Huffington Post website, Caroline Bologna shares some opinions from readers about the Grandma Shower trend.

Her readers expressed varying opinions about the practice.

The writer at Etiquette Hell expresses an extremely negative take on the subject of Grandma Shower trends.

Even the etiquette experts like Miss Manners have weighed in on the issue.  In this response to a reader question, Miss Manners says: “Baby showers are intended to be for friends who are actually having babies.

A co-worker producing her daughter or granddaughter to collect goods from strangers is indeed a bald grab, devoid of friendship.”

No matter how they feel about it, etiquette experts agree:  If you decide to host a grandmother shower and be the one who throws a baby shower for the new Grandma, tread carefully.

If you are going to embrace the Grandma Shower trend, here are some do’s and don’ts when it comes to Grandmother Showers.

Is having a shower for the Grandma-to-be simply an unacceptable gift grab or a genuine celebration? Click to Tweet

The controversy is real.  Take time to consider the feelings of others, the unique situation of the Grandmother, and how you will approach the event.

If you decide to be the one who throws a baby shower for a new Grandma, you’ll find this guide super helpful.

The arrival of a Grandchild is time to contemplate this new phase of life, the new role as a grandma, and an opportunity to celebrate and share your joy.

As a Grandmother myself, I think it is a great idea if it is planned and carried out with consideration and thoughtfulness.

What do you think?

Would you appreciate it if your friends held a Grandmother Shower in your honor?  Would you participate in the Grandma Shower trend and host one for someone else?  Let me know your reaction in the comments.

As always, Keep Passing Down the Love,

A Xylophone and Other Annoying Toys Grandkids Love

Amazingly Special Gifts for New Grandmas in your Life

I am expecting my first grandchild at the end of the year and I’m very excited about having a grandmother’s shower. It is a new and exciting chapter of life that I’m happy to celebrate with my friends. My son and the baby’s mother live out of state and I do want to have baby things on hand for when they visit. In my case, I think it will be helpful to them to not have to pack every single baby item when they travel here, knowing that many of the things they need/use for the baby are already here. A good friend of mine and my mother-in-law were going to host the shower. I had no idea there was any controversy surrounding the notion. Now I’m second guessing even using the term “shower” if it’s deemed in poor taste. Perhaps an elegant co-ed cocktail party to celebrate our entrance into “grandparenting” would be more tasteful.

We have Grandmother showers as well as Mother of the Bride/Mother-I -law showers at work. We would make silly gag gifts so there was no showering the person with lavish gifts just a fun lunch hour.

Kimberly, My friends recently threw me a surprise grandma baby shower. It was at a restaurant during dinner so there were no games, but each friend told a story of a special memory/tradition of their grandma, which was fun to hear. I opened gifts, and was excited to see many books, burp, cloths, bibs, spoons, socks, ect. . We finished dinner and conversation and had a lovely evening. I think a grandma shower is a lovely idea but should be kept to an intimate group of friends and the gifts suitable for grandma to keep at her house for the baby.