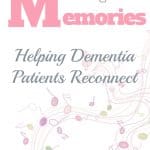 Music and It’s Relationship to Memories

Research shows that music and memory are closely related.  Music can elicit memories from a particular time in your life, triggering forgotten emotions about relationships, love, joy, fun, tragedy, heartbreak or loss.

The mind creates a place deep inside where these memories are stored.  Hearing those songs can bring back vivid recollections of the past at times when you least expect it.

Dan Cohen, founder of MUSIC & MEMORY® began a program that introduced iPods and MP3 players to dementia patients at care facilities and in their homes.  His research showed that an Alzheimer’s patient could be reconnected to the world through music.

In a CBS interview, Cohen said: “Our senses — sight, smell — really light up a very small part of the brain. But music lights up many parts of the brain.

So even though the brain may deteriorate in certain areas, other areas of the brain are still very much there”.

In 2012, “Alive Inside:  A Story of Music and Memory“, a documentary about Cohen’s work, was shown at Rubin Museum of Art in New York City.

The video clip of Henry, included in the documentary, went viral and the world became increasingly aware of the influential, positive work of Music & Memory.

I was moved by this video of Henry, who was one of the patients first impacted by Dan Cohen and his work.  His reaction is priceless and was instrumental in increasing awareness and boosting support for the Music & Memory program.

They collect donated Apple Music players in working condition and take donations to support their work.  Do you have a gently used iPod that you no longer need? Help MUSIC & MEMORY® spread the music and find your iPod a good home with someone like Henry.

10 ways to Increase the Laughter in Your Life

25 Old-Time Board Games to Play with your Grandchildren

My mom has dementia and music is a huge part of what she enjoys right now. I've started playing movie theme songs from the 1940's and she loves them! I know it brings back memories for her, but she's not able to verbalize them. Music matters!!

Dementia can be such an ugly, sad thing. Bringing a little joy through music can feel good and be so encouraging!

I love this and it’s oh so true! When my daddy was “out of it” at the end of his life I would turn on his music and he would tap his foot and sing along!!

The video really touched me. I had to write this post about it. Thanks for sharing!

So true. Music does bring back memories for me with every song I hear...I relive that time in my life. Beautiful video.

I agree, Pamela. It's funny how even a few notes of a song can bring back a time in your life!

What an amazing video you shared. It was very touching and awesome to see the effects of music on the mind. I shared this and sent if to my husband who loves and plays music. Via Blogging Grandmothers

Kathleen, It really is a wonderful project to help dementia patients. Thank you for sharing.