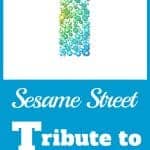 Sesame Street still brings back great memories!  I thought I’d share some of mine with you here.  This is my Tribute to the Letter T, brought to you by Sesame Street.

Sesame Street first aired on PBS in November 1969 and has been on the air ever since.

The goal of its creators was to provide education, preparing toddlers for school.

It was also entertaining for children and soon became extremely popular.

Sesame Street earned many Emmy awards and a place for Big Bird on the cover of Time Magazine.

Sesame Street was popular with my family.

My little sisters watched (I was a preteen by that time, so…), my 80’s kids watched, and now even my Grandkids love Elmo and Cookie Monster.

A favorite book at our house is still this Sesame Street book.

Share some of these Sesame Street clips with your Grandchild.

These will still bring a smile, even after all this time.

While I was thinking about this post for the letter “T”, I started singing the song.

But it was Letter B, not Letter T.

Do you remember that one?  Let her be, let her be…  Well, you can listen to it below, along with my own favorite Sesame Street song.

A Sesame Street Tribute to the Letter “T”.

Who can resist an Elmo video? In this video, Elmo introduces us to the Letter “T” in a musical way that pulls kids in!

Kids love turtles and this little video of a turtle hatching is interesting AND educational.

Cookie Monster has to be one of the favorite Sesame Street characters of all time. This one does not disappoint.

And as I promised you above:

This song was running through my head and was the inspiration for this tribute post to the letter T.

Letter B.   By the Beetles.

This is a great little video about the Letter “B” instead of “T”, but I couldn’t resist including it because it’s one of my favorites. The Beetles singing a Beatles song all changed up!

We had a cocker spaniel when my boys were growing up.

We always called him a hard-working dog.

This was his theme song.  Just for you, D & D, just because.

Be careful.  This song will stick in your head…

Connect with your Grandkids with this fun song.

Share the fun, a little learning, and a glimpse into the past.

Brought to you by Sesame Street and the Letter “T”.

If you missed the previous posts in the #AtoZChallenge series,

16 Ways to Exercise with Your Grandchildren

Being a Grandma is an Adventure

RVing With the Grandkids

My kids loved Sesame Street and Mr Rogers when they were little :) Shared x 4 ♥

How fun! Sesame Street was such a big part of our lives. I still can’t count out loud without saying ‘ah Ah Ah’ at the end!! Lol!!

That's awesome! SS had a way of pulling you in... those lines still in our heads 40 years later!

Our family loves "The Monster at the End of This Book" and it was one of the first books that we gifted to our grandson! We did watch a lot of Sesame Street over the years, but gave away our TV and went without for a decade, so our last two daughters kind of missed out on this icon. Our daughter-in-law and son set pretty strict limits on TV time for our grandkids, but I'm sure they've seen their share already.

The Elbow Resting Places book is also a good one!

Love this post! My grandkids are beyond SS now, but these clips and songs sure bring back memories for me! My kids watched, and then their children. I’ve admired how they grow with the changing society over the decades. I also admire your commitment to this writing challenge! Well done ?

Thanks, Joan. This has been a tough challenge. And now - I can't get Letter B, Letter B out of my head!

My kids loved Sesame Street - I think it was the first show that catered to short attention spans - lots of bright colours, singing, talking, scene changes, fun characters - what's not to like? Our granddaughter is just getting into being allowed to watch TV (she turns 2 this week and her parents are pretty strict with screen time) I imagine Sesame Street will feature on her favourite list soon too.

If they are going to have TV time, Sesame Street is a good choice. Kids seem to still love it and can learn even if they don't intend to do so.