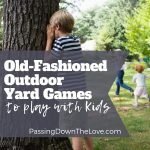 Get the kids outside and have a blast with these classic old-fashioned yard games to play with kids outside.  A Blast from your OWN past!

Classic Old-fashioned Yard Games to Play with Kids Outside

Remember those days when you played until the street lights came on? The days of little worry, skinned knees, hiding out and carefree times?

Why not share those awesome feelings with the kids in your life?

These Classic Old-fashioned yard games to play with kids outside will bring back those days for you and create new, fun memories for them.

Two kids make an arch holding their hands up, face to face and the rest will pass under the arch.

Begin singing the song and the rest of the children pass under the bridge one by one, creating a circle of players. They continue to walk under the arch one by one in a circle. When the last word of the verse (Lady in “My Fair Lady”) is said, the two children who form the arch have to capture one child by dropping their hands down.

That child will sit out until the next game.  The game continues until each kid is captured.

More verses to the song can be found here:  Classic Nursery Rhyme Lyrics

Listen on YouTube if you don’t know the tune.

Any number of player can play.  To play alone one person walks in a circle, while two or more will hold hands and walk in a circle.

Sing the song: “RIng-around-the-Rosie.  A pocket full of posies. Ashes, ashes, we all fall down”.  Stop walking and quickly sit down.

The last one standing is our and sits off to the side until only one person is left.

The lyrics to the song can be found here:  Classic Nursery Rhyme Lyrics

Listen on YouTube if you don’t know the tune.

At least six people are required for this game.  Divide into two teams.  Teams line up opposite each other 20-30 feet apart.  Each team member holds hands

The first team picks a player from the other team to “call over”.  They then chant “Red Rover, Red Rover, send Johnny (use the player’s name) right over”.

Johnny, (the called player) then runs over and tries to break the chain by running through the linked hands. If the chain is broken, Johnny can take either player who allowed the break back to his team. If the chain is not broken, this player joins the team that called Red Rover.

Teams take turns calling out Red Rover and challenging a player on the opposing team.

The game ends when all players are on the same team.

In this old-fashioned yard game, one child is the designated stoplight. This player stands at a distance and faces the other children who are in a side-by-side line.

Start a new round when one child reaches the stoplight.

Mother May I is a perfect type of game to play with kids outside. One child is the “mother”.  Mother gives the commands.

The rest of the children are given commands by mother and must say “Mother May I?” before proceeding.  If they fail to ask permission, they must go back to the start.

Watch this for a demonstration.

Decide who will be IT.  This person will chase the other players, trying to tag them.  When someone is tagged, the tagged person becomes IT.

It is best to set boundaries for the playing area.  For example, you can’t go past the driveway, or you must stay in the grassy area.  Smaller spaces will make it harder to stay away from IT.

There can also be a safe zone, like a tree, a stepping stone, or some sort of base.  When a player is touching the safe zone, he cannot be caught or become IT.  However, a player should only be allowed to remain in the safe zone for a small amount of time.

One way to do this is to begin counting when the safe zone is reached and the player must leave the safe zone when the count reaches 20. Decide on any rules before starting play.

Decide who will be IT.  The person who is IT is able to  “freeze” other players.  When the game begins, everyone runs away from IT.  IT chases after the other players, trying to tag (touch) them.

If a person is successfully tagged, he or she must “freeze” in place (stand still and not move). Frozen people cannot move until another player un-freezes them (touches them to return them to normal).  An unfrozen player can resume playing.

The player who is IT wins by freezing all the other players.

Here is a video to help explain this game.

Hide and Seek is a great classic old-fashioned yard game to play with kids outside.

Play with two or more players. Set the rules for hiding before play.  Let players know what areas are “off-limits” – don’t go down by the pond, or don’t go in Mommy’s room.  It may be a good idea to set boundaries, too – don’t go past the fence, etc.

The player who is IT hides his eyes and counts to 100.

The other players find a place to hide. When counting is complete, IT says “Ready or not, here I come!”  This lets the players know the “seeking” portion has begun.  At this point, they must try to find all of the other players who have hidden.

IT tags the found players. The person who is “It” should give the universal “all clear” signal if some of the hidden players do not return home before a predetermined period of time.

If they can’t be found,  Yell, “Olly, Olly oxen free!”  They will know it’s safe to come back.

The first person found will be IT in the next game.

One person in the group will be Simon.  Simon stands in front of the players and tells them what they must do.

Whoever follows a command when Simon didn’t first say “Simon says” they are out of the game.  Last player standing wins and gets to be Simon the next round.

This game can get silly.  Be creative with the requests from Simon and have fun!

Here are some other fun games to play with kids outside:

My Grandmother had a croquet set.  We always wanted to play during our visits.  It was different from anything we had at home.  We loved setting it up ourselves.  With mallets, balls, and wire loops, we were entertained for an entire afternoon!

The one we used was very much like this one:  Croquet Set.

Horseshoes, a great outdoor game for summer picnics and parties, should probably be saved for the older kids or adults.

Here is an example of a Horseshoe Game Set. If younger children are allowed to play, close supervision is required. or get them their own plastic set like this one.

This is a fun game for outdoors but has a lot of rules.  It is so popular that is has it’s own website.  Check it out for yourself:  SquareFour.org

Make up your own

There are so many ways to have fun outside.  Play one of the games mentioned here or make up your own.

Either way, get outside and get some exercise, play, use your imagination, and have a blast with your Grandkids!

Have a Blast RVing with the Grandkids

25 Old-Time Board Games to Play with your Grandchildren

A Xylophone and Other Annoying Toys Grandkids Love

When I was a kid, we played outside with the other kids in the neighborhood with most of our free time. We also made the most of recess at school. We kept ourselves quite occupied without any of today s modern technologies. Listed below are some no-tech games that you may have enjoyed as a kid. I sure did. Some can be done indoors. Some can be done by yourself or with just one friend. But most of them are best when done outside with a group of people. Also, most of these games can be changed or improved by making up your own rules. Use your imagination!

This is a great list of outdoor games to play with the grandkids! I remember playing croquet when I was a little girl. Nothing I love more than entertaining my family in my backyard! Love your blog Kimberly!!

I love getting the littles outside! And it's usually a good workout for me, too! :)

Memories! I wonder how many generations these have been passed down?? Can’t wait to try a few, thanks for the ideas.

We played all of these when I was a kid. It's fun to go old-school every once in a while!

Wow! This brought back so many memories from my own childhood - times were so simple and uncomplicated back then - I'll have to remember these for the years to come as our grandchildren reach the age to be able to enjoy them. I love all that you do with yours.

Leanne | www.crestingthehill.com.au Y for You are Unique